Tess and her "serious hair." Are you wearing the right clothes for your career? 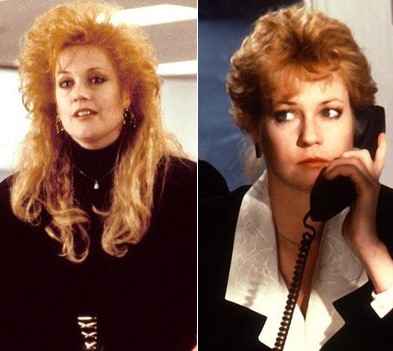 The movie Working Girl came out in 1988. I was working at the time (junior copywriter at an Ad agency) and I loved it.

So did everyone else.  It was a huge success, award nominations all round.

It highlighted some important issues of the time and we all like a "rags to riches" story.

It doesn't stand up well in 2020. The hero is considered a decent guy early on simply because Tess doesn't have a horrendous #metoo experience when she's unconscious. Sigh.

Moving on. In the film, Tess is a secretary from Staten Island (Ann Roth, the costume designer spent a ton of time on the ferry researching). Our Cinderella (complete with the arch-typical scheming other woman - sigh) aspires to be an executive.

In a line I will always remember, Tess McGill says, "You want to be taken seriously, you need serious hair."

It seems facile now that she rose through the ranks due to a haircut (ah...Cinderella and her blue dress?), though still true in so many ways, (insert another sigh) but here's here I'm going with this.

She wore what would get her closer to her goals.

Let's give Tess some applause here. She had a dream and firmly told her best friend (delightfully played by Joan Cusack) she was taking action.

So I’m going to ask you the same question.

Are you getting dressed in the morning for your goals?  For who you want to be?

I don’t want you to dress for somebody else.

I don’t want you to dress to fit somebody else’s expectations or perceptions of what you should look like.

(If you don't like what you have to wear to work, the business is wrong, not you.)

Look in the mirror and introduce yourself.

If I feel congruent when I say "Kia Ora, I'm Erin and I teach The Happy Wardrobe Method which transforms women who want to make an impact," then I'm good to go.

Try it, keeping your goal in mind.

And let me know what happens.

I'm going to be running free workshops and I need the practice - can you help? I'll film them for replays too, since we're all on different time zones.